Either side of the soon to be reconstructed and reopened pier, in a forgotten corner of the South East coast, sit Hastings and St Leonards.

It’s brasher neighbour Brighton & Hove takes centre stage on the South coast today, having grown from a fishing village in the early 18th century, to a city of 250,000 people today, but it is Hastings and St Leonards with only 90,000 people,  that has the real history running through its streets and its festivals, dating back to the defining Battle of Hastings in 1066.

The Jerwood with East Hill funicular railway leading to the Hastings Country Park, and Old Town to the left.

It is here, at the foot of Old Town, at Rock a Nore, on the Stade that the prestigious two year old Jerwood Gallery sits overlooking the fishing boats.  The exhibition has been made possible  through ‘Art Happens’, the Art Fund’s crowd-funding platform, which raised nearly £30,000 to fund the event.

Last night, caught in an unexpected torrential storm, I entered the Jerwood to see the latest work from the Chapman brothers, Jake, a painter and Dinos a sculptor, In the Realm of The Unmentionable, a fitting start to a dark and uncomfortable experience .

The brothers, arch-provocateurs of Young British Art, grew up in the town, that clearly haunts them.  In a recent interview with Jonathan Jones of the Guardian “It figures quite a lot in my nightmares,” says Dinos. As kids here in the 1970s, they lived in the middle-class St Leonards neighbourhood – their father was an art teacher – and remember being terrified of the boys and “derelicts” from the old town around today’s gentrified historic fishing beach.  Adding that “it used to be called ‘Smack-on-Sea’”.  Happy days!

This article from the local paper includes a short video of a small sample of the exhibition for those who aren’t able to make it to Hastings.  http://www.hastingsobserver.co.uk/news/local/chapman-brothers-return-to-hastings-1-6377839

The huge, (each cabinet must be about 3m x 1m x 2m high) Sum of All Evil, especially reworked, stops you in your tracks as you enter the main room.

The cabinets before the reworking of the models.

Chris Connelley writing in the Hastings Online Times admits ‘ I have always been a huge fan of the Chapman Brothers’ http://hastingsonlinetimes.co.uk/arts-culture/visual-arts/chapman-bros-at-jerwood  Describing the scene inside the cabinets as ‘rainbow-socked, hacked-off-at-the-ankle god-like figure presides over thousands of models, dead and barely alive, in an uncompromising killing fields landscape that demands our extended close attention, taking the traditional museum battle diorama to an altogether different level.’

The walls either side of the cabinets are hung with maybe 80 identically sized etchings in a regimented row, half from 2012 and the remainder completed this year, of Los Caprichos, the reworked set of 18th century etchings by Goya.

In contrast the far wall contains a patchwork of framed childlike sketches, reaching far out of possible view, interspersed with three academic drawings that Jake Chapman made in Hastings in 1983, when he was 19.  In the most ambitious of them – titled Ken and the Skeleton – a sad, middle-aged male nude poses beside a hard-boned skeleton.

Then there is the Emin tent.  Why?  And the lowered ceiling with a tiny painting by A Hitler, and more work the other side….

Connelley concludes ‘All in all, In the Realm… is a triumphant homecoming, which grapples with dark, disturbing and distressing themes with such a playful, arch, even comic touch that it prompts easy, regular, ready smiles alongside our uncomfortability, upset and unease. The work on display quite simply demands our fullest attention, and is genuinely engrossing, ensuring our visit is an unusually immersive experience in our often-vanilla walk-on-by contemporary visual culture.’ 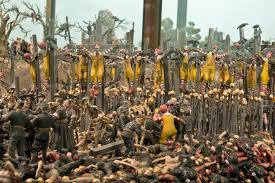 His closing comment ‘Their triumphant return to Hastings reveals that behind the comic horror of their art lurks a powerful vision of the modern world’s brutality.’ does not appear to be universally shared judging by the comments following the article,

Dear Jake and Dinos
Give it a bloody rest and move on.
Jeez.

Have they shoehorned Hitler in again?

Apparently Nazis are quite bad people, something no-one would have known without YBA. Also, war can be quite horrid, so best avoided.

Detail from one of the cabinets

It felt like an exhibition for lovers of Monty Python, which I am not.  My husband loved it.

Was it the town that influenced their work, or did they manage to develop such an unforgiving view of humanity all by themselves?