Angela has presented Task 3 and introduced us to the concept of using a ‘map’ to explore our practice.

The mapping is to be a strategy to lead into the essay, and to that end will be the supporting document for the essay, effectively where thinking is carried out.

I fully understand the wisdom of not holding everything in your head, what I am not so clear about is quite how creative we are meant to be with the task itself.

What is the context for me?

What does my background bring to my art?

The relevance for me?

The essay will require quite deep research.  The map needs to support this.

This, in turn, really  needs to address the points raised by Caroline for the Personal Practice Plan (PPP):

Networks outside of the MA

Where am I contextually in the wider art world?

In my usual, logical, way I am approaching this task in a practical manner, start with the main areas and work out.  At least this way I will have highlighted all I think I know at this point in time, and I will clearly see the areas that need to be addressed.  What will not be so clear is what is left out, so I need to be alert to that.

Funny, coming from a systems design background, I can see the bigger picture, how the map, the PPP, the essay will all meld together.  I can see how we are being gently led to water, and how supported we are in the task.  Unfortunately, what I am failing to see is exactly what question is at the core of all this work.  If there had been a major factor or incident that had driven my life, say my parents had survived the holocaust, or I had survived ill health, or abuse as a child, or had a particular connection to another culture, there would be a narrative to my work.   But I have had an ordinary life, only tinged with great sadness and I am not sure that that is an appropriate narrative, or a comfortable place to dwell.

Having looked at the options for the format of the map, suggested by Angela, I am viewing this as a working document at this stage, rather than a work of art.  With a mind map I have the detail and the bigger picture, but the question remains, what is going to drive my work forward?

Today I followed the ‘other resources route’ that Angela reminded us to look at.  I have compiled a book list to support me in my quest for an answer, focusing on painting, the prospect of a different discipline being more than my head can cope with at the moment.

Downs (2007) – Drawing Now- Between the Lines of Contemporary   Art

Having thought quite deeply about this point, I don’t believe  that changing medium at this juncture will aid my thought process.  I could be wrong, and I am keeping an open mind, but for me it makes more sense to take small steps into the future, and see what happens, rather than taking an unstructured huge step sideways.  To focus on experimentation with surface, which is resonating with me.

Here I am working into an existing canvas print with emulsion. 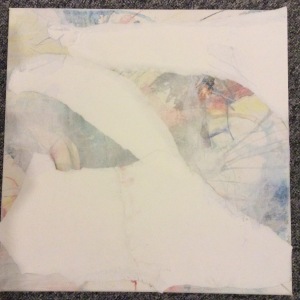 Watercolour paper of a slightly lighter weight than I would normally use has been pasted to the canvas, with most other areas masked with tissue paper.  At this stage I have no idea what I will paint, but the palette will be defined by the unmasked image.

The aim of my experiment is to see whether this approach will work for me with a view to scaling up my work.  My first experiments with watercolour on canvas lacked the vibrancy of paper.  I am hoping that the addition of watercolour paper will create a new dynamic.  The end result will be the ability to produce significantly larger works, that will be sealed, as with all other mediums on canvas, but not glazed, because glazed work much larger than my current of 100 x 80 cms becomes unwieldy and dangerous, not to mention very easily damaged by the handlers at major exhibitions.

‘Other resources’ includes critique and processes of current and former OCA students.  I was particularly drawn to Emma Drye’s critique of Jereme Crow’s work.  A series of paintings of a single lemon in a small glass dish.  A challenging and brave choice of subject.  http://www.oca-student.com/resource-type/student-work-uncovered-jereme-crow

Emma’s reference to narrative imagery and symbolism, the subtle embedded interest in process.  The qualities of light, gesture, composition, scale, colour.  Imagery to symbolise the narrative, how are you going to deliver as an artist?

This led me to think about my current environment with regard to subject and risk.  Hastings is steeped in history, but what defines it in modern times is its relative poverty.

I looked at the government stats.  On first pass I found this table (which I couldn’t get to copy more meaningfully).  I don’t profess to understand the figures or what a  Lower layer Super Output Area (LSOA) actually is, that isn’t my point here.  I am just using this table to evidence the definition of Hastings, relative to the rest of the country.  The only borough in the South to be included.

‘The English Indices of Deprivation 2010 use 38 separate indicators, organised across seven distinct domains1 of deprivation which can be combined, using appropriate weights, to calculate the Index of Multiple Deprivation 2010 (IMD 2010). This is an overall measure of multiple deprivation experienced by people living in an area and is calculated for every Lower layer Super Output Area (LSOA) in England. The IMD 2010 can be used to rank every LSOA in England
according to their relative level of deprivation.’

Number of LSOAs amongst 10% most deprived

But where there is poverty there is also scope for improvement, and the regeneration is tangible.  The arrival of the Jerwood, the rebuilding of the Pier, the grot busting scheme to restore properties and the dignity of tenants.  Following Angela’s theme of metaphor, the words that spring to mind are:  Community Spirit, Intelligence, Creativity, Determination.  On reflection, it also encompasses my family, and in particular my daughter, who is currently spearheading the regeneration of the White Rock area, close to the pier.

Hastings is however different to many poor areas, for a start we are in the affluent South, with relative but not commutable distance to London.  In Victorian times the area, particularly St Leonards, was very wealthy.

When London boroughs started to use the coastal towns as housing overflow, together with the associated drink and drug abuse, a practice that continues to this day in Worthing and Littlehampton, the character of the area changed.

Hastings has not suffered from industrialisation or the loss of it.  In fact its main historical industry was, and is, its beach fishing fleet at the Stade, also home to the Jerwood.

Top left is the Jerwood.

Fishing holds no interest for me, but as a symbol or metaphor, it does.  I need to live by the sea.  I am piscean.  Words I associate with fishermen, Brave, Fearless, Determined, Family, Caring, Community, Character, Tradition, Hard Working, Provider, Skill.  There is also a religious, which for me is a spiritual connection, at one with our planet.

The other essence of Hastings is its people.  Many have lived here all their lives, and the new arrivals (Over from Brighton OFBs, us, and Down From London DFLs) rarely leave.  There is a long held secret about the place, a friendliness that really opens up once you commit to putting down roots.  With such a community come the festivals, Jack in the Green, Fireworks, Mackerel, Story Telling, Carnival, Fat Tuesday (Mardi Gras), and events, Riotous Decadence New Year.

Jack in the Green
Colourful, Spirited, Pagan, Anti Establishment, Survivor, Fun, Authentic.
Not sure what is happening here but this journal is acting very much like my painting process, developing as I write.  Regeneration, Fishermen, Festivals, metaphors for what they represent to me, but also representing  those aspects of me.  I feel somehow liberated, focused, and able to give something back to the town that has made me feel so at home.

Marcus du Sautoy on the power of diagrams, 14 mins. Nicholas Copernicus with his Diagram that was the start of modern astronomy.

Hans Rosling on the joy of statistics, 5 mins.

An extraordinary visual representation of 120,000 statistics.

Mind Maps
Spontaneous exploration of an idea or visual means of recording key ideas as an aid to remembering. Deals with relationships and connections, nonhierchical.  Tony Buzan is probably the most well known exponent of mind
maps.

For an educational perspective – The Theory Underlying Concept Maps and How to Construct and Use Them.
Novack and Canas.

A concept map showing the key features of concept maps. Concept maps tend to be read progressing from the top downward. 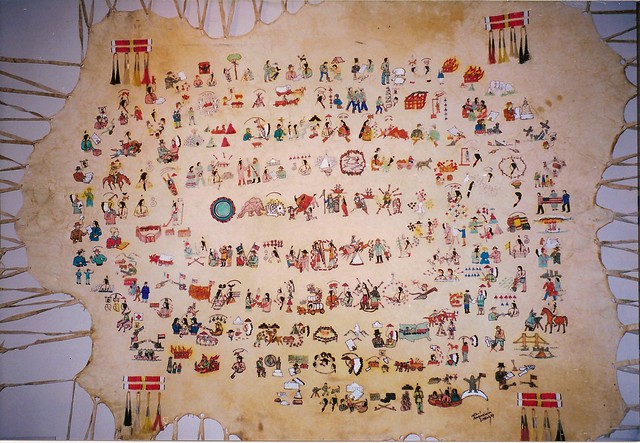 ‘It is  almost unbelievable that people who speak a multitude of different languages can be connected by these invisible lines that mean the same thing to each one of them.’

‘The Australian Aborigines speak of jiva or guruwari, a seed power deposited in the earth. In the Aboriginal world view, every meaningful activity, event, or life process that occurs at a particular place leaves behind a vibrational residue in the earth, as plants leave an image of themselves as seeds. The shape of the land – its mountains, rocks, riverbeds, and water holes – and its unseen vibrations echo the events that brought that place into creation. Everything in the natural world is a symbolic footprint of the metaphysical beings whose actions created our world. As with a seed, the potency of an earthly location is wedded to the memory of its origin.

The Aborigines called this potency the “Dreaming” of a place, and this Dreaming constitutes the sacredness of the earth. Only in extraordinary states of consciousness can one be aware of, or attuned to, the inner dreaming of the Earth.’ Painted 17th century Tibetan ‘Five Deity Mandala’, in the center is Rakta Yamari (the Red Enemy of Death) embracing his consort Vajra Vetali, in the corners are the Red, Green White and Yellow Yamaris, Rubin Museum of Art

‘Mandala is a spiritual and ritual symbol in Hinduism and Buddhism, representing the Universe. The basic form of most mandalas is a square with four gates containing a circle with a center point. Each gate is in the general shape of a T.’ Hildegard von Bingen (Saint) circa 1098? – mandela of the four seasons.

The netting caught my eye.

Mapping the Territory – script for the Pecha Kucha

.           The process of thinking and collating created immersion in the task

.           It became apparent that mindmapping would be too restrictive going forward

How to drive my practice/practicality/maintenance/visibility/space

.           A fan format concealed too much, the lotus flower was ok but not aesthetically pleasing

.           An early example of an emotional response in contemporary work

.           Monet’s motif over form, flowers the pretext for colour and rhythmic display