The process of painting from family photos is proving interesting.  Anton Ehrenzweig references ‘the self-destructive attack of unconscious functions on the rational surface sensibilities.’, calling the tragic images of creativity ‘poemagogic’, because they describe the act of creating.’ 1 p xiii  He suggests that ‘creative work succeeds in coordinating the results of unconscious undifferentiation and conscious differentiation and so reveals the hidden order in the unconscious.’ p4  He explains that undifferentiation, as distinct from chaos, ‘corresponds to the primitive still undifferentiated structure of a child’s vision of the world.’, p5 what Piaget calls ‘syncretistic’ vision.  E H Gombrich 2, talking about ‘matching’ an image with reality implies that it is either analytic or syncretistic.

Picasso’s The Woman Weeping at first seems chaotic to the conscious mind.  The resemblance achieved by a syncretistic portrait relies on a subtle balance that defies conscious analysis. 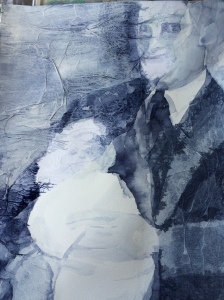 I am working on four images.  Progress is slow.  The scanning between undifferentiated and differentiated states seems to require distance with the work, as if whilst working I am ‘manipulating’ what I am seeing to being that which I want to see.  It is only by stepping back, and a photographic image of the work is particularly helpful for this, that I see the ‘reality’.

Looking at First Born l from this clinical distance, I do not ‘sense’ the essence of my father.  Yes the protectiveness, the awkwardness, the pride are all there, but the connection that I had with him isn’t, so I must return and rework the essence, working purely from memory. 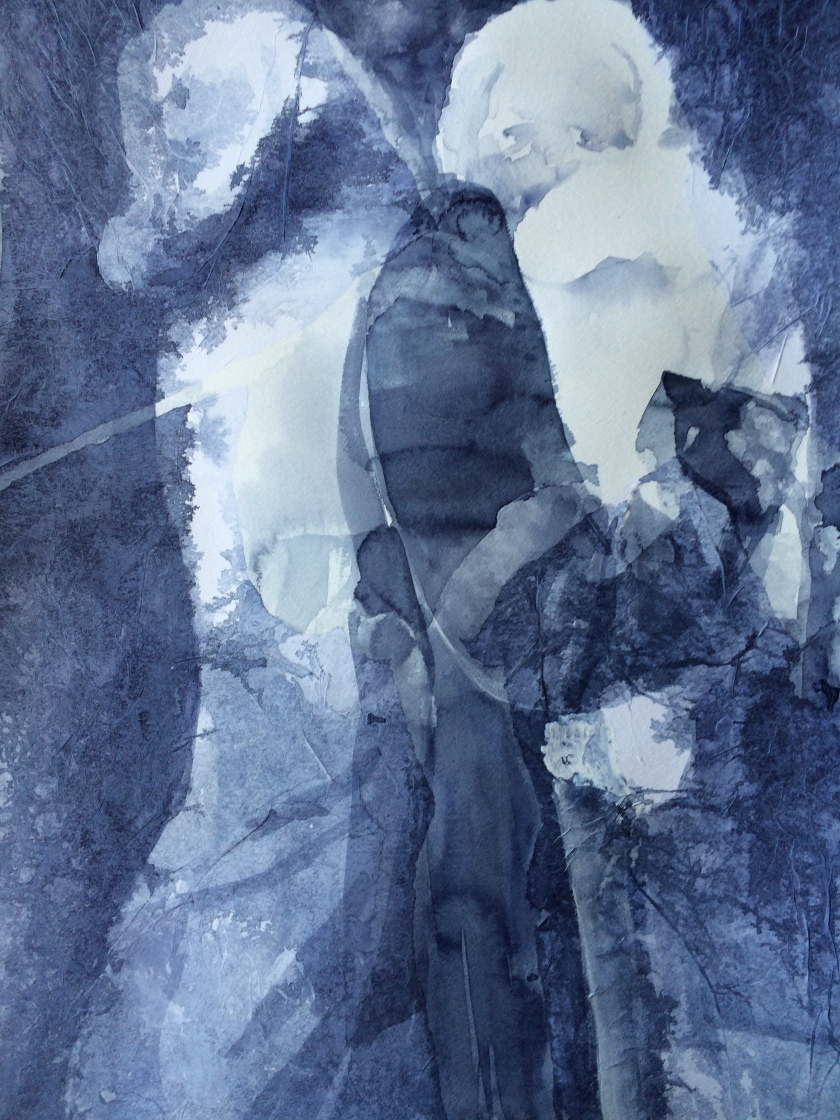 There is still some tidying work to do, (sleeve is too dark, the line leading off the left of the image is distracting), but the essence of the image captures our relationship.  It is interesting that there is a greater distance between my mother’s face and mine, than in the photo, and that area is particularly blurry.  This image ‘took off’ from the first line of my mother’s back, as if she was happy to step into the work, grateful for the attention.

Marion Milner when describing the process of free drawing, as she grappled with the complexities of learning to paint, acknowledges ‘in one part of the mind, there really could be a fear of losing all sense of separating boundaries; particularly the boundaries between the tangible realities of the external world and the imaginative realities of the inner world of feeling and idea; in fact a fear of being mad…..The same fear was to appear again with the imaginative perception of action in nature, the fear of letting go common sense appearances and letting in imagination meant letting in madness.’1 p17

Her work, reprinted many times over 40 years, approaches the creative process from a psychoanalytical practice led perspective, ‘free drawing’, then analysing the work, as if a Freudian dream.  Interestingly, writing in the second edition she noted that whenever she was able to break free of creating a ‘mechanical copy’, there was ‘a feeling that the ordinary sense of self had temporarily disappeared..’p154  Referring to Ehrenzweig’s three phases of creativity (projection, integration and re-introjection 2 p276), Milner posits that the analytical states of consciousness, described as elation, blankness and oceanic, could be viewed from a different perspective.  Mystical writings refer to ’emptiness’ as beneficial, as the central concept in Taoism.  ‘Is it not possible that the blankness is a necessary prelude to a new integration?.. there is some force or interplay of forces creating something new, and to suggest that the way we think about it affects the way it works… that a number of states of mind that are different from every day conscious awareness may be in part an expression of the unconscious or half conscious need to give this creativeness its freedom..’ 1 p154/p155

Perhaps there are moments when I share her fear. 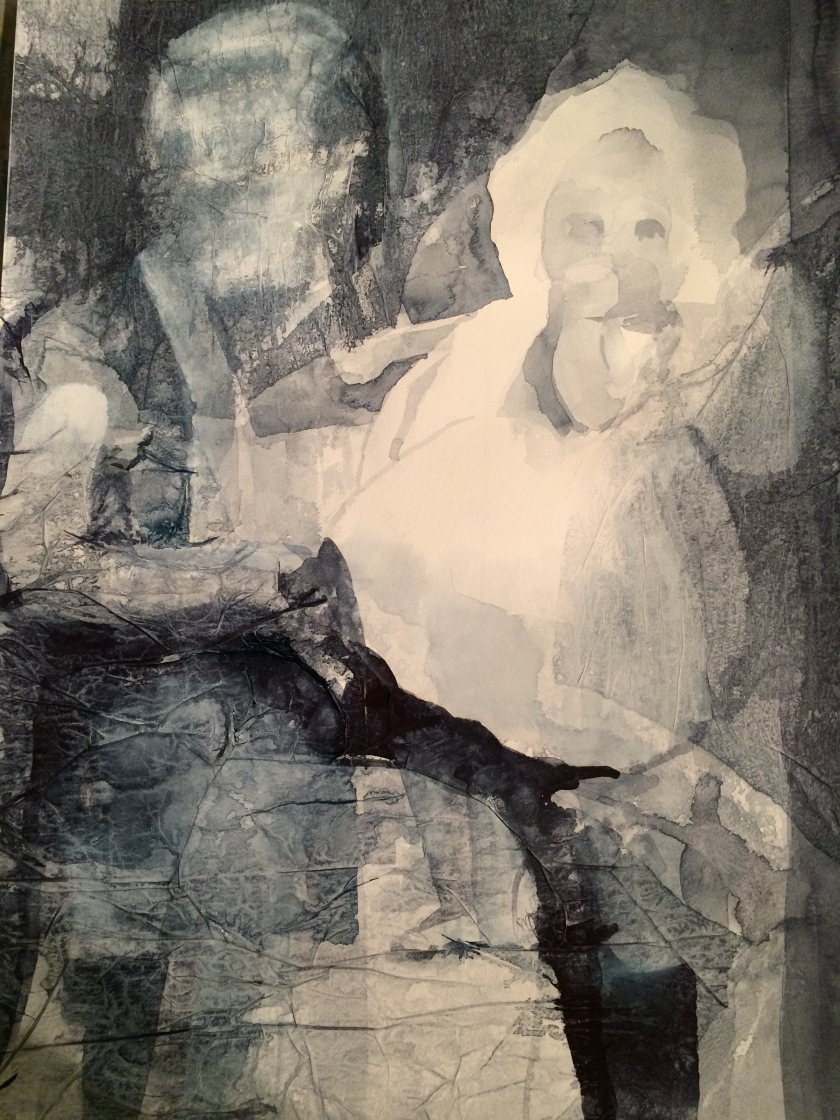 Grandma and Me, watercolour on paper 56 x 76 cms

With this image I creep gingerly forward, spending time adjusting areas that jar.  The tissue texture is working particularly well on the apron, with the contrast between our skins evident.  I catch myself veering towards ‘likeness’ and walk away until I can get myself into the right space with a cup of tea or a change of music.  It is possible to feel my eyes scanning the image for details or areas that are not congruent with the whole.  Yesterday during the second phase of the large collaborative drawing we are producing at the drawing class (detailed in blog Peeling the Onion) we spent as much time scanning and consciously analysing, as we did mark making .  Working on such a large scale magnified the process and made it that much easier to see exactly how the conscious/unconscious dovetails.

As the four images approach resolution, where next?  As part of the research for the contextual study I have developed a heightened awareness of my intuition.  Yesterday I inquired in the drawing class how to approach bringing my drawing into my painting and I was directed to Kandinsky’s Point and Line to Plane.  Today leafing through my unread books I was drawn to Cottrell’s Critical Thinking Skills.  Neither book would have consciously been selected.

So where next?  I am returning to the comment I made in my Pecha Kucha.  Am I an abstract artist who has yet to let go of form?  The word ‘fragmentation’ is also appearing in a number of different contexts.  I will explore both through my practice and reflection, whilst not losing sight of my quest for ‘essence’ of form.