Watching Francis Bacon:A Brush With Violence on the Beeb last night, I realised why I hadn’t been eager to paint for more than a few minutes on each painting, for the last few days.  The issue was where to next.  If I resolved all the works I would have to move forward, and I didn’t feel quite ready to.  Two aspects were concerning me, the ‘abstract painter hanging on to form’ comment I had unexpectedly written in my Pecha Kucha, and the word ‘fragmented’, which had bounced off the pages of Ehrenzweig’s book and also formed part of the process for a couple of local artists I admired, Patrick Goff and Marie-Louise Miller, who are both using colour and fragmentation to make bold statements. 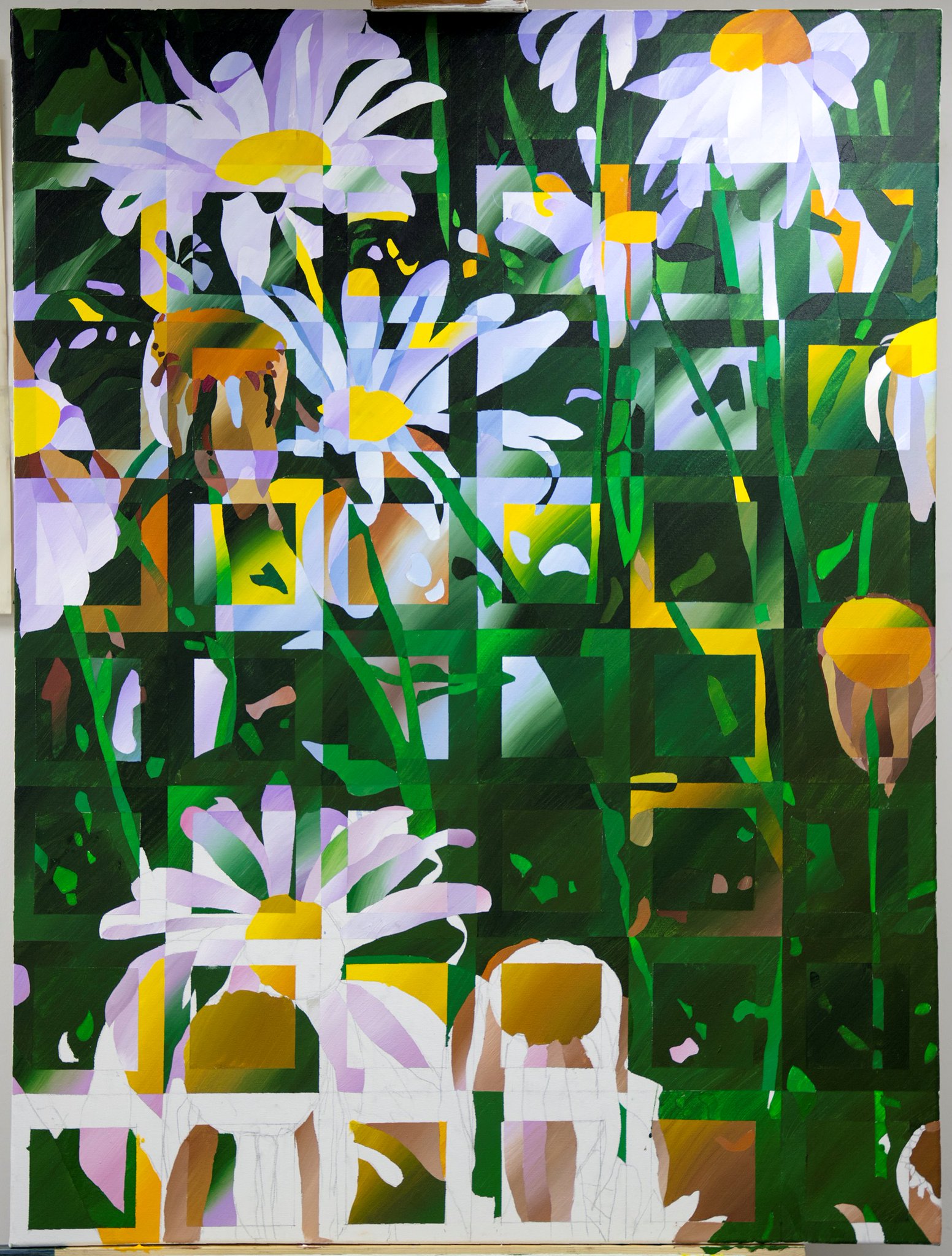 Bacon’s dalliance with violence and pain is evident in his work, but it is expressive use of colour supporting the fragmentation and the process of fragmenting that are of particular interest.  I had been considering the idea of tearing up a copy of my current series and reconstructing.  Seeing Bacon working from photos rather than life models, and often crumpled versions of the image, confirmed that this was a possible next step of reaching the ‘essence’ of the form and perhaps, as a byproduct of the process, letting go of form.

Tearing the copy of Grandma & Me creates an image that replicates the Ehrenzweig’s unconscious scattered fragmentation.  My conscious mind still reads the original image, much in the way that we are able to read words where all the letters are jumbled except the first and last.

A crumpled version of the same image feels like a more appropriate starting point to develop the work.

This is the enlarged photocopied crumpled image.  Interestingly the copying process has added cerulean and ochre to the whites, colours that Celia Paul used in much of her work. Interestingly in Francis Bacon: Fragments of a Portrait from the BBC archive, at minute 26.10, talking of chance and what he calls accident taking over, when he says that consciously he doesn’t know what he is doing, critic David Silvester asks Bacon ‘When you take chance you mean something more than improvisation, you mean as if you are really working without making conscious decisions? What are you thinking about?  How do you suspend the operation of  rational decisions?’  He replies that ‘I am thinking of nothing, but how hopeless and impossible this thing it is to achieve, and by making these marks, about which I don’t know how they will behave, suddenly there comes something which your instinct seizes on, as being for a moment the thing by which it could begin to develop…an ordered image that has come about by chance.’ Note: I have since learnt that sketch books were found following Bacon’s death, that confirm that the ‘chance’ element was a mystique that Bacon liked to encourage, but was far from the truth.

I start a new work with the working title of Devil Child as part of the first series,

to look deeper at the three stages of creativity, as defined by Ehrenzweig.  This represents the first stage where Ehrenzweig states ‘The creative mind must be capable of tolerating imperfection.  Creative man [or woman] awakens from his oceanic experience to find that the result of his work does not match his initial inspiration.  The unconscious linkages established in the manic-oceanic level have not been fully translated into surface coherence.’ p193

I also start the research piece for the second series.  I am definitely letting go of form, but is this the right direction?