Slowly recovering from the over indulgence of this time of year, I am losing myself in the books I have been given, a different perspective.  From my son, Think Like an Artist by Will Gompertz.  Bells are ringing.

He talks of Bridget Riley only coming to prominence when her personal pressure valve burst and she abandoned colour for black and white, her Plan B.

Much of what he is illustrating is what Caroline and Angela have been stressing:

Experiment constantly, be curious, there is no failure, only learnings and Plan B.

Identify past experiences, work, relationships, interests.  It was particularly interesting to following the development of David Ogilvy, the US ad agency boss, and how each aspect of his life contributed to his final direction and success.

Borrow, but preferably steal and build on previous artists’ style,     achievements, discoveries.  Nothing is new.  The development of Picasso the brand in his Blue Period was a distillation of everything he stole and then built on.

Make connections that are unique to me.

Amelia Cox recommended frequent referral to Michael Atavar’s How to be an Artist.  He states ‘Find one simple idea and build on it – fast, slow, inverted, forward, splintered, whole.’

The net has been flung too wide and I need to focus on exactly what I am trying to catch and why.  Sounds easy, but I feel as if I have been on a silent retreat since I read this, trying to leave the space for the answer to float to the surface.

Am I starting at the beginning and letting chance play its part, or at the end and making the evidence fit the ‘crime’.  Is it about process and the decisions, perceived or otherwise on this journey?

Is it possible to make work without intention, or is intention always lurking in the murky waters?  If it is lurking, by what means could I, do I access this intention?  What is the actual intention?  If there is no perceived intention, is it possible for others to imbue such on the work?  A letting go of outcome, only a need to release.

I talk of emotional  connection with the work, with the viewer, which implies an intention, yet if it exists, it is within the forth dimension, wordless.  If there are no words, how do I describe what happens?

So what is driving the work if not intention, if not wordless communication?  How do I access this ‘essence’ and direct to the outcome I am questing, if in fact this is the purpose?  If it isn’t, what is?

Am I any nearer the true question?  Not sure.  Maybe a mind map to help clarify.  More digging.

Caroline suggested I read this slim volume by Virginia Woolf.  The work is in the style of a journal, where Woolf muses on the lot of women in the centuries prior to 1928, and how a modest income (then £500, more likely £20,000 today), and a room for solitude would have painted a very different literary landscape.

The  gentle ‘stream of consciousness’ certainly made me pause for thought.  Indeed why were there so few women in the arts?  Woolf surmises how it might have been, the lack of education, the betrothal at an early age into what could be considered servitude, the lack of privacy or funds.

I have written before that I have not experienced sexual discrimination in my working life.  Had I been blind to this?  I asked a friend who had also worked in IT since the early 70’s and she echoed my experience.  Perhaps we made a lucky choice.  However, I am more aware now that there is still a long way to go.  Will this feed into my work?  Maybe.

I live on a fairly dull street, which is fine in the summer with the sea view from my studio, but a bit grey in the winter.

View from my studio,

A few doors away is a vacant plot of land with crumbling hoarding, about 30  by 2.5 metres.

A few of my paintings blown up would brighten up a grey day.

I have spoken to my printer who has confirmed it is feasible.  Using images scanned at 600 dpi I could produce a poster up to 4.5 by 3.5 metres, so no problem sizing up.  The cost would be about £12 a square metre, so cost wouldn’t be prohibitive.

Practical considerations: are there any bye laws preventing me doing this?  I will obviously need to approach the owner, and to capitalise on the marketing aspect, contact the local press.

My understanding is that this project is not necessarily about producing new work specifically for the project, but about the process and about testing and challenging me.  Therefore I would like to use existing work, which will leave me free to concentrate on the mechanics of the exercise.  That said, if I do manage to produce something suitable in the meantime, then that is a bonus.

With regard to audience engagement I would include my Facebook, Twitter and email, and ask how the work and the idea made them feel.  To be honest, I live on the type of street where ripping off wing mirrors and discarding pizza packaging is of more interest, so I am not expecting much in the way of response, but I would be delighted if I was proved wrong.

Our task is to consider where our practice might sit, where new audiences might be, and to record our voyage of discovery in our journal, alongside the execution of the idea, with a fixed deadline of 14 March 2016.  A reflective piece of 750-1250 words, including bibliography and Harvard Referencing, identifying site, situation, audience, decision making process, public engagement, and a reflection on benefits and disadvantages for my practice, to also be produced by the deadline.

We are to consider our connections, who we know or have access to, the nature of the work and its connections, and where I have seen work like mine.  Alongside location we may consider changing the format, the scale, materials or method of viewing, by projection, in a magazine, an artist’s book or a web site.  Les Bicknell, the tutor for this project, highlighted a number of interesting examples, a mown lawn used as a canvas, the rear window of a vehicle, a postcard blown up to wrap around a scaffolded building.  He asked how uncomfortable/challenged I want  to be.  A thought provoking question indeed.

We were asked for our initial ideas.  I was particularly struck by the political content of Alison’s, Emma’s, Maire’s and Mwamba’s ideas, from projecting forgotten people onto the Spanish parliament building (with possible imprisonment!), to painting people and their clothing for a performance piece in London, perhaps with regard to the homeless, or from prostitutes in Zambia, to a giant dress and the homeless in Ireland.  I have never considered myself political or even a feminist.  I have never found it necessary to fight to be equal, but I am noticing more injustice with this government, perhaps because they feel so empowered, that subtlety is no longer necessary, or perhaps I am just waking up!

I was also struck by the gentleness of Monika’s idea, a natural extension to her current practice, to sit in her local coffee shop and ask people to record memories of their first cake, then to feed the comments back into a future work.  This idea is not dissimilar to an idea I was discussing with Annabel in my tutorial, where we discussed inviting the viewer to record the emotion they feel when looking at a piece of my work.

My starting point was that I have exhibited in galleries, interior designers, solicitors, churches and doctor’s surgeries, so that would not present a real challenge.  I want to be stretched, but I am a realist, and whilst projecting my work onto the white cliffs of Dover from a boat out in the Channel might be amazing, it is unlikely to be achieved in three months, with a two week public shutdown for Christmas.

So what could I achieve and what could I afford to achieve, because there wouldn’t be time for public funding applications?  My work is colourful, and my initial thought is to brighten up the winter months in a public space, say a park or a public hoarding.  I could leave my email/Twitter/FB contact details for feedback regarding the emotional impact, and then consider how I could reuse the comments in a future work.

Politics does not form part of my current practice, so its inclusion in this project would fall  outside the extension brief.  However, I live in the poorest area in the South East, reminiscent of one of the East London boroughs in the 80’s, overflowing with creative, anarchic individuals, where industrial chic and up-cycling rule.  I do need to reflect on this for future subject matter.

I am embarrassed to admit that I knew absolutely nothing about Giacometti, other than I thought he was an Italian Renaissance sculptor.

So wrong.  Alberto was born in Switzerland in 1901 and died in 1966.  His father, Giovanni, was also a well known post impressionist painter.  He is best known for his skinny sculptures, but he was also an extraordinary painter. 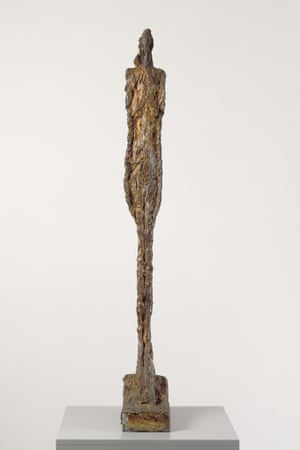 In 1922 he moved to Paris to train with Antoine Bourdelle, an associate of Rodin.  However, this exhibition is more about painting than sculpture, and Alberto’s close relationship with his family.  His mother, his brother Diego, his wife Annette and ‘Caroline’ an acquaintance with questionable connections, each have a room.  His portraits are extraordinary.

The subdued palette, the placement of the subject, the visible workings and reworkings, the energy, as if the marks have been scratched into the paint.

I am reminded of the recent Turner exhibition at Tate Britain, where after several rooms of beautiful work, I felt overwhelmed by the sameness. This exhibition had much the same quality, several rooms of similar work, but rather than feeling overwhelmed, it was their sameness that was captivating, that created the intensity of emotional connection to the work.

I am afraid all the images I could find do not do justice to his work.  It is one of those exhibitions that you just have to go and see.  The beautifully illustrated book of the exhibition is on my Christmas list.

With time to spare before I collected my granddaughter from nursery, I headed to the Borough Art Gallery on Borough Road, home of David Bomberg.  I somehow had managed to miss the recent Borough Group exhibition, but I knew they kept a small sample of work on permanent display.  The Elemental Force of Charcoal: Drawing at the Borough, on until 16 Feb, is a number of expressive charcoal works from the Sarah Rose Collection, by Bomberg and his students, principally Dennis Creffield, Edna Mann and Miles Richmond.

Surprisingly I found Bomberg’s charcoal works heavy and lacking sensitivity, whilst this particular work by Creffield was an inspiration. The multilayered, suffused mark making, is powerful, sensitive and emotional, seducing the viewer in.  It is easy to miss the cathedral until alerted by the title.