I wanted to see the watercolours of East Sussex war artist Eric Ravilious (1903-1942), whose life ended tragically off Iceland.  The work is unmistakably 1930’s-40’s, you can almost sense Foyle, from the Hastings television series, in the Train Landscape, 1940.  The work is charming, modest and muted, ably recording a period in history that is long gone.  The absence of people creating disquiet, rather the peace.

Train Going Over a Bridge at Night 1935

By comparison, the work of Cornish painters Roger Hilton, Alan Davie, Ben Nicholson and Patrick Heron, brought together by William Gear, as curator 1958-64, though only 20 years later than Ravilious, could have been painted in a different century. I am not familiar with Davie’s work, which appears so at odds with landscape colours of the St Ives painters, but I was captivated by this work, with good reason.  A Scotsman from Stromness, born in 1920, he travelled extensively, finally settling in Treen near Lands End in 1960, until his death last year.   He painted automatically, with the intention of releasing the unconscious and was fascinated by the work of Carl Jung, maintaining that his symbols had meaning.  I will be returning to his work as part of my research question.

By further contrast, there were a number of works by the Bloomsbury artists Duncan Grant, Vanessa Bell and Roger Fry, whose lives I have been researching for some colour work I am experimenting with.

Two works caught my attention for because of the subject’s eyes, but for very different reasons.  The first was an unremarkable arable painting of 1889 by Sir George Claussen, Ploughing. 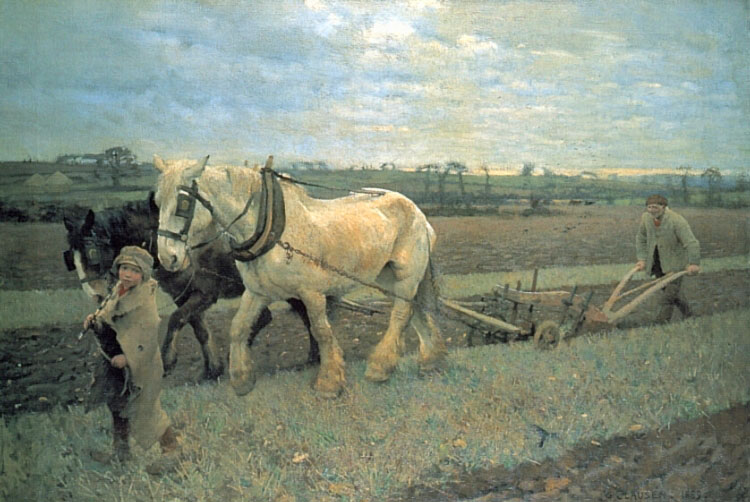 It isn’t evident in the reproduction but the face of the child has a quality that can only be described as out of it’s time.  Painted in a modern style, that is not replicated elsewhere in the work, the eyes cannot be ignored.

The second work was part of Julian Germain’s  photographic exhibition, The Future is Ours, premiered at the Towner.  Here reviewed  in  Wall Street International http://wsimag.com/art/17305-julian-germain-the-future-is-ours

The works taken in classrooms from as far away as Yemen and Peru, show children at work.  On one large wall there is a projected work.  It is only after a few minutes that you notice that it is a video, with the pupils motionless, apart from the occasional slight movement.  Once you start to look more closely and move from side to side through the work you become aware that the eyes appear to be following you.  Irrational but thought provoking.