Following on from Klee’s On Modern Art, I spotted a book about Klee and painting music by German art historian and lecturer, Hajo Duchting.

I must admit to being disappointed that the book was about Klee applying the motifs and rhythms of his musical knowledge, as a professional musician, rather than being inspired by and responding to a particular piece of music.  That said, Duchting ably charts Klee’s exploration of the subject, together with his specific use of colour to support the rhythms in his work.

What I found particularly useful was the charting of the development of his ideas, supported by examples of Klee’s work.  His representation of movement in time in watercolour, in Fugue in Red, 1921; 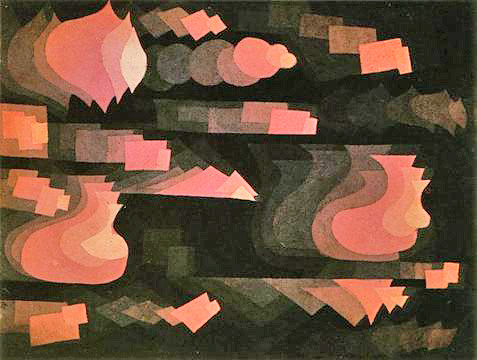 developing the relationship between tonality and colour during his years at the Bauhaus; his ‘polyphonic painting’, where Duchting notes ‘the layering of various structured areas produces…..a harmony of forms, in which colour takes on a specific meaning.’ p65; through to one of his most accomplished works, Ad Parnassum, 1932, 100 x 126 cms, where the juxtaposition of orange and blue creates an iridescent flicker.

As I battle to get my work to ‘sing’, I realise I have a lot to learn with regard to the placement, application and layering of colour.